Boldly go where no one has gone before. Last Thursday my post re-introduced the basics of the Exploration Age campaign setting. In case you missed it, here’s an excerpt:

Now take a look at the rough world map.

Now as you can see, Canus has tons of blank spots. The Damned Lands, North and South Poles, Glacius, and Verda all have those big gray areas. That’s unexplored wilds of snow, jungle, marsh, mountain, desert, forest, and more. It can be whatever the GM wants to put into the world. That’s just the surface of Canus. The setting’s underground is almost entirely unexplored.

Why are these blank spots part of Exploration Age? Again I will excerpt my recent post as a reminder.

That’s why this map has blank spots. So GMs who are inspired by the world to create more can easily make a piece of it their own. There’s tons of inspiration and hanging story threads within the pages of the campaign guide’s manuscript to help bring players and GMs into the unknown.

All of that being said, let’s talk about hex crawls. What are they, what challenges do they present, and how can we make them awesome?

What Is A Hex Crawl?

If you’ve ever played the classic module Isle of Dread (which was revived as part of the D&D Next playtest), you might remember this map. 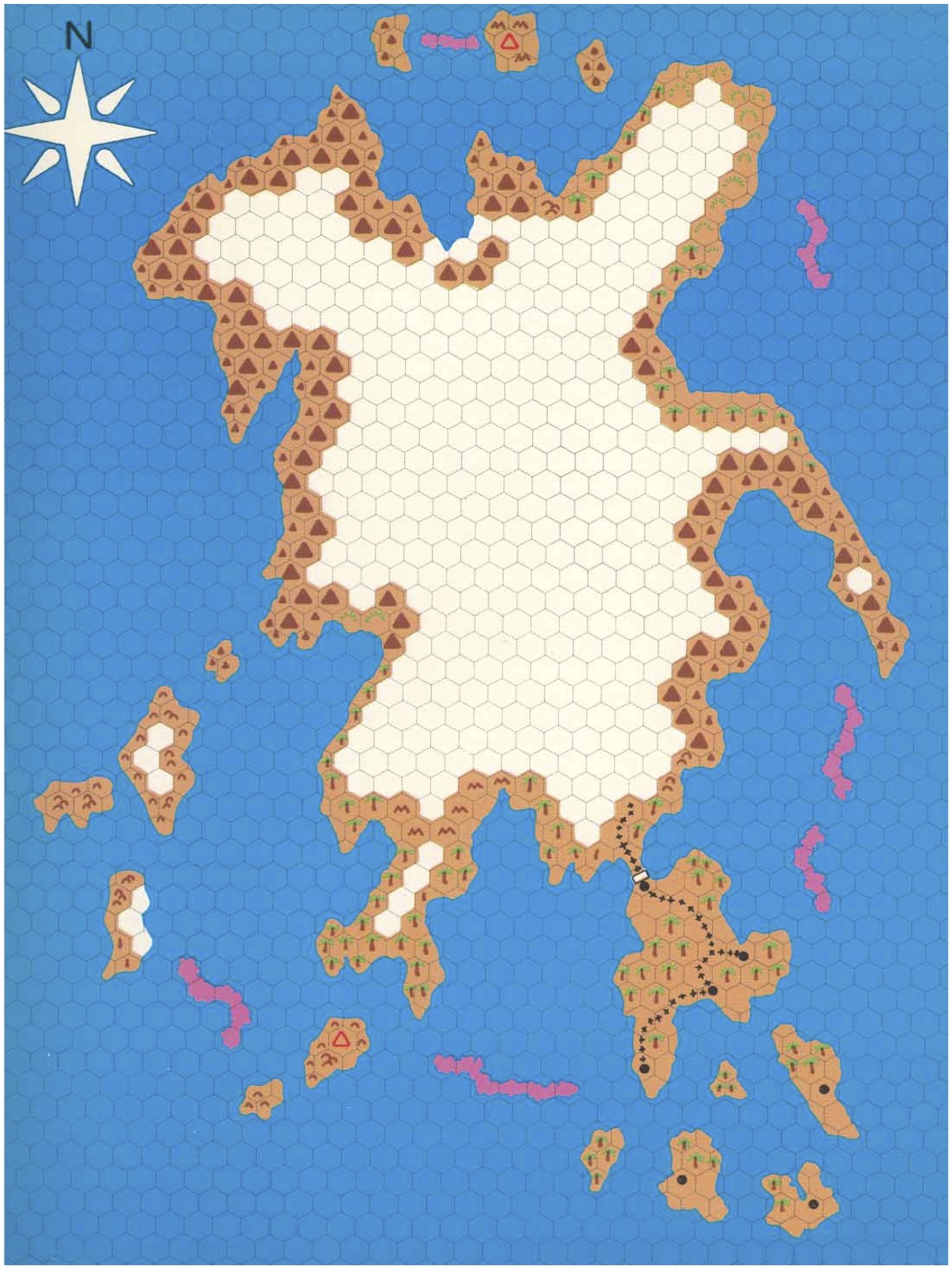 It’s given to players who have to explore the island to find various points of interest during the quest. The white hexes are unexplored areas of the map. As the PCs trek the island the map is slowly filled in hex by hex. Isle of Dread is one of many adventures that use this idea for exploration.

That’s the basic idea of a hex crawl. Players explore the unexplored and map out an area. They’re usually on the hunt for a specific adventure site like an ancient temple or crossing the unknown wilderness to get to something they do know is on the other side. There are times when the PCs might be exploring for the sake of exploration… and that’s when you can run into trouble.

The Challenge with Hex Crawls

Hex crawls can be downright boring. Simply wandering through an area of blank spots hoping adventure bites you on the butt can be fun for the PCs if the area is rather small or if you have an interesting adventure site in every other hex, but most hex crawls involve large, unexplored areas with just a few interesting places spread throughout.

Wandering all over a map without direction is frustrating. Players will have the same feeling that you get when you’ve taken a wrong turn in your car and can’t figure out how to get back to the highway. Being lost can be fun for a short time but the players will quickly grow frustrated if they don’t feel like they’re accomplishing anything, especially if there isn’t more than a random encounter or two in all but 1/20th of the hexes they explore. If you can overcome this challenge, hex crawls can be a lot of fun for players as they dive into the unknown.

Here are some tips to make hex crawls a great time.

Give the PCs Direction

Give the PCs some direction as they enter the unknown. Hearing that their target site is along a river, mountain range, lake bed, etc. gives them a direction to follow instead of wandering all over the map as you exhaust every encounter on your random table. You could give your PCs this information simply by saying something like, “Follow the river into the jungle and keep following it until you find the lost city!” or, “Head East from here to find the Mountains of Madness and follow them South until you find the Temple of the Crawling God.” You could instead give the players something a little more cryptic, “Go due North from here until you reach the edge of a cliff. Follow that cliff West to the Donkey’s Head. From there climb the Hill of the Crying God. Once you make it to the Valley of Hymns, seek the Lost Goblin’s Ear.”

The Blank Spot is a Short Cut

Of course the adventure site your PCs wish to find does not have to be in the unknown area. Maybe they simply need to cross an unexplored area to get to someplace they know on the other side. Right now one of my gaming groups is making their way through the middle of Verda because they seek a port on the opposite side of the continent from where they started. They have direction and are uncovering great mysteries as they head through The Sprawling Jungle. This approach allows the PCs some leeway to figure out how they want to cross the blank area. It also lets them keep exploring if they’re having a good time.

Find Clues Along the Way

Of course sometimes you want to plop your PCs in the middle of a blank area without direction… to start. For instance getting shipwrecked and finding yourself waking up on the shore of the Isle of Dread. This can be thrilling at first, but have your players get some direction quickly. Maybe they meet someone who can guide them, maybe they get some cryptic clues about where to go from an old journal, or maybe they see a landmark that’s a clear adventure site (like a golden temple atop a volcano). As the players investigate, let each interesting site direct them to at least one other site within the blank area. This makes your hex crawl feel a bit like the classic point-and-click style adventure games where one discovery leads to another and saves they players from frustration.

Tempt Them Off the Path

When your players have a clear direction, go ahead and give them a few reasons to stray from the path. Maybe they come across a person who knows the area well and points them in the direction of treasure. Maybe a NPC traveling with the party or one of the PCs gets carried off in the night by a local monster and the group decides to track down the foe. Maybe they catch a glimpse of a godly being and follow it way off the trail as it beckons to them. Maybe the path they are on becomes impassable due to flooding, avalanche, or some other natural disaster. Maybe the party is being stalked by a large pack of hungry wolves and needs to travel in an erratic way to get the doggies off their scent. Remember that part of the fun of a hex crawl is the unknown factor. Even the best laid plans should go awry.

Since the unknown is part of the fun, be sure to surprise the players. Throw a lake of lava in the middle of a glacier. Have a city of civilized ogres welcome the players with the erudite sophistication of the classiest nobles. Make lightning bugs sing lullabies as they blink at night. Let sharks roam in freshwater lakes. Make the ants extra huge and the elephants super tiny. Take something they know and completely turn it on its head. Subvert their expectations. Your players will be eager to keep exploring to see what else might blow their minds.

Great random encounter tables are a key ingredient in any successful hex crawl. They’re so clutch that I should actually write another blog post just about that. So that’s what I’m going to do! Stay tuned.