Today I’m continuing my quest to add killer undead to the options already available in the fifth edition Monster Manual for my world of Enora. Today we enter the world of undead plants! (You read that right). You might say, “Whoa, James. Plants that are evil and dead? C’mon.” To that I’d say, “Of course, dear reader. Haven’t you ever seen Evil Dead? The most terrifying scene involves trees (that are presumably both evil and dead).” 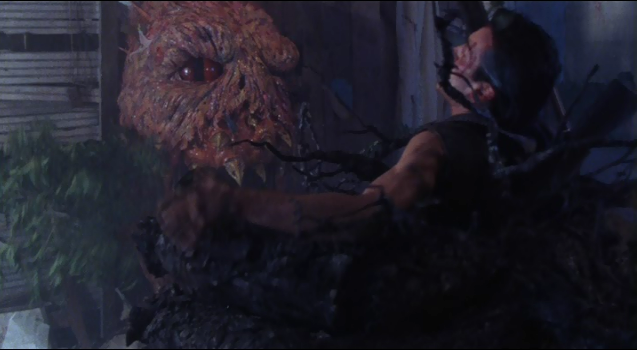 It is with great pleasure that I now show off vampiric vines.

Vampiric vines are sentient clusters of black thorned vines that thirst for the blood of the living. When a plant dies as the result of necrotic magic and its seeds are scatter on desecrated ground, these vines grow forth and eventually uproot themselves and crawl out into the night in search of a drink.

Nocturnal Hunters. During the day, a tangle of vampiric vines stays in the desecrated dirt from which it sprung forth. At night, the undead plant crawls forth, looking for unsuspecting creatures and an easy meal before returning home. The vines leave the bodies of their drained victims behind, sometimes causing panic that a den of vampires is nearby, attacking the land at night.

Hidden in Plain Sight. Vampiric vines appear to be normal dead brush when at rest. If a victim wanders into a lair, the vine waits until it is within striking distance and then pounces.

Save Snacks for Later. Vampiric vines are surprisingly strong, and will sometimes drain enough blood from a victim to drop it unconscious and then drag the prey back to its lair for more feeding later. Sometimes vampiric vines will feed off a victim for days before drinking enough blood to kill it.

Get them in the PDF below or grab them anytime on the Free Game Resources page. These stats are in playtest mode, so I’d love any feedback you have for me!