Prison for Dragons – The Road to Ruins

Last week I wrote about the prisons for dragons built by aberrations. Then I wrote about the specific history of one such dragon prison, Shuzal, and provided some adventure hooks to give players a reason to visit the aberrant ruin. Today I’m going to discuss encounters which can occur around Shuzal.

Before I get going let me send a shout-out to Nils Jeppe over at Enderra. He’s hosting this month’s RPG Blog Carnival and the theme is “Unusual Dungeons.” That great choice inspired this series of blog posts. For a general overview of what a dragon prison is check out the first post in this series. For the specific history of Shuzal and quest hooks to get your PCs headed there, check out the second post in this series.

In this post I’ll give you a description of the area surround Shuzal’s entrance citadel and tables for random encounters PCs may have on their way to the ruin. 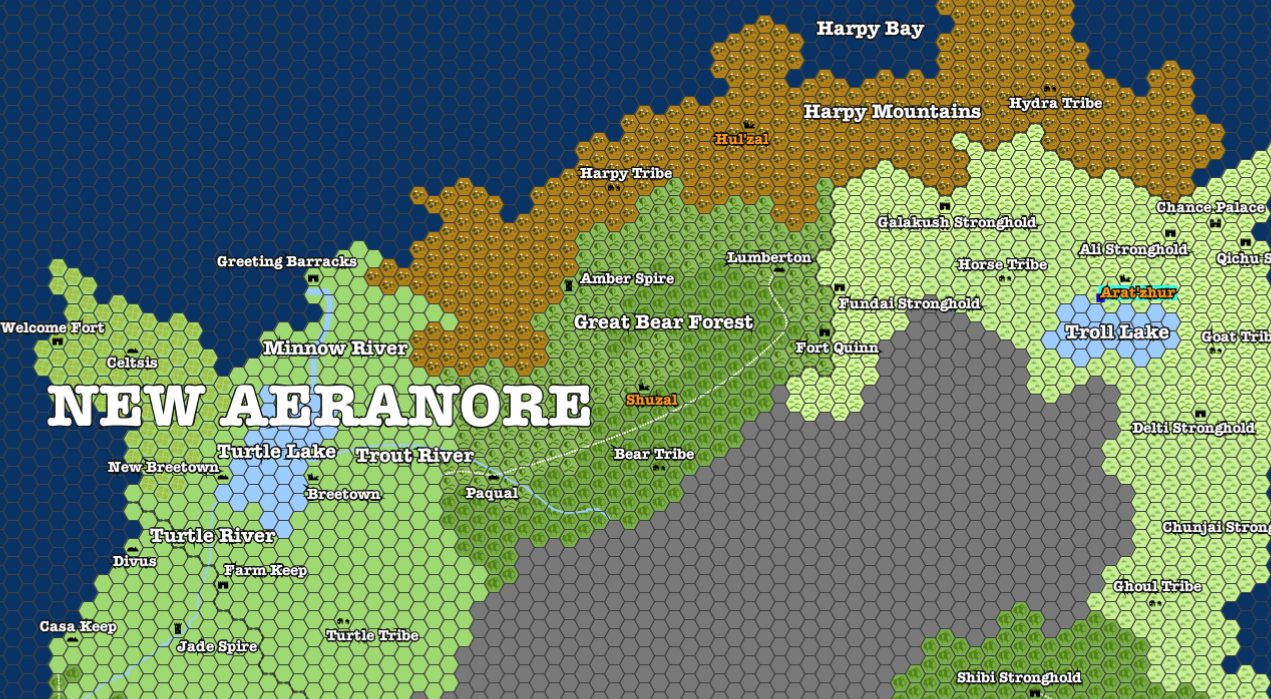 Shuzal is located within the Great Bear Forest between the Aeranorian colonies of Paqual and Lumberton, the tiefling Amber Spire, and the village of the Bear Tribe. The Great Bear Forest is chilly and mysterious. Every morning the woods are covered in thick mist and the sounds of animals calling and responding to one another fills the ears of the tribes and colonists. This routine ends with the baritone call of the great bears. The Bear Tribe describes their namesake as elusive, enormous bears infused with spiritual energy by their gods. The bears protect the wood, and lumberjacks from Aeranore have been warned many times that if they continue their work they will be marked for death.

PCs could be based in one of the following settlements or pass through them on their way to Shuzal, depending on the hooks used. The small descriptions below can be expanded upon. Assume the colonies and the tiefling spire have a place to buy most mundane goods and services, while the Bear Tribe does not offer much in the way of goods and services for sale, but might be willing to barter in exchange for items or favors from the PCs.

Lumberton (Colony Population 1,500) Lumberton is a community of humans and gnomes focused on exporting lumber all over Canus. The companies here dream to one day expand and overtake one of Taliana’s main exports. The elves and halflings of Taliana currently does not see this colony as a threat, but that doesn’t mean they aren’t keeping a watchful eye.

Paqual (Colony Population 2,500) Nobleman Sydal Freedrock has convinced the people of Paqual that they should not be subject to the rule of Icillia IV, who sits on a throne across the sea and does not understand the problems of the Verdan colonies. He wants Paqual and Aeranore’s other colonies to rise against Icillia IV and declare themselves a separate nation. Trying to garner support, Sydal will soon make his own claim for Paqual’s independence, with or without the other colonies. Many of Paqual’s citizens agree with this separatist attitude, though some Aeranoreans see Sydal as a power-hungry tyrant who desires a kingdom of his own.

Amber Spire (City Population 30,000) The Amber Spire is home to some of Verda’s most isolationist tieflings. Outsiders cannot enter the walled city unless accompanied by a tiefling who has legitimate reason to enter the spire (as deemed by the guards). The city is built upon itself with winding roads which lead the way up to its pointed top. The tieflings here often specialize in the aburjation school of magic and train with great weapons. Like many of Verda’s tieflings, they rarely leave the walls of the spire without good reason and are suspicious of any outsiders who enter their city.

Bear Tribe (Village Population 400) The half-orcs, humans, and orcs of the Bear Tribe live a peaceful life in their small settlement of longhouses. They are friendly toward outsiders though they believe the Aeranorians in Lumberton and Paqual are angering the spirits within the great bears by taking more lumber than they need. Though they are not at war, the Bear Tribe has many great fighters and accomplished shaman who can spring into combat a moment’s notice and keep the village from harm.

PCs traveling to Shuzal may choose to take the trail between Paqual and Lumberton, which they may travel at normal speed, or they may cut through the forest, through which they travel at half speed, unless they are using a special mount or magic item. One hex on the map above equals 50 miles.

Use the table to determine what type of encounter occurs. For encounters marked with an asterisk use the descriptions provided after the tables.

Use the descriptions below for encounters marked with an asterisk.

Members of a tribe of bugbears, hobgoblins, humans, half-orcs, githzerai, gnolls, goblins, kalashtar, orcs, or any combination of these humanoids might cross paths with the PCs in the forest. These tribal warriors are decorated with the patron animal of their tribe (decided by the DM). Friendly warriors might belong to the bear tribe.

The PCs come across a human lumber merchant who is alone in the forest. The merchant’s caravan was attacked by the Ox Tribe ogres. The merchant wishes to return to the safety of Lumberton and will pay the PCs 50 gp each to act as escort.

Everything around the PCs goes silent and then enormous, majestic bears traveling in a pack cross their path. Unless provoked the bears pass by peacefully. If the PCs are on their way to Shuzal to stop the ogres, one of them receives a charm of animal conjuring as a gift from the bears.

The PCs come across members of the Explorers’ Guild or Society of Seekers searching for new aberrant ruins.

This lumber caravan is on its way to Paqual with a fresh order of lumber to ship to Aeranore or on its way to Lumberton to get more lumber to send over seas. They are friendly and able to provide directions, food, and water to the PCs.

This morchia and its Aberrant Alliance followers stalk the forest for victims for the morchia to devour.

This spireless tiefling was kicked out of the Amber Spire years ago for violent tendencies. If it sees the adventurers it stalks them, trying to separate them and pick them off one at a time.

Coming up… the first layer of the dungeon!