I’ve been running a fifth edition game for almost a year and it’s clear to me that there aren’t enough high challenge rating monsters to provide me with the variety of combat encounters I like to have at my disposal. Yes, bounded accuracy lets me use the old standbys far after the PCs’ level is much higher than the bugbear’s CR. I just need to keep adding bugbears… but combat with a lot of baddies is slow and can become a grind. That’s not the kind of variety I’m looking for.

That’s why I submitted a series of monster articles to EN World EN5ider, an online magazine which publishes content for the fifth edition of the world’s most popular tabletop roleplaying game. The first of those articles, “Epic Threats: High Level NPCs,” presents five new NPCs with challenge ratings of 12 and above to add to your game. If all goes well, there might be another article or two presenting some more of these high level threats to add to your game. 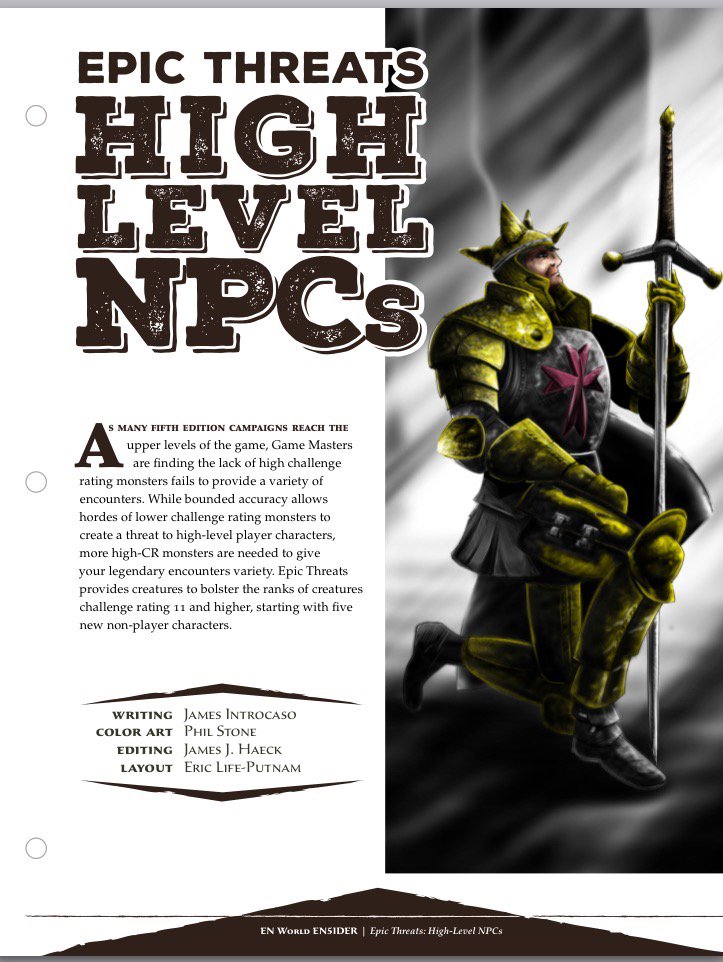 I have to say, if you’re playing fifth edition and craving more content, EN5ider is a great place to get it. I’m not just saying that because I’ve now written for them three times. You get one short adventure a month plus another three articles with advice on running chases, new diseases, new druid circles, creating puzzles, and so much more. You get all that for $2 a month. If you don’t want the adventure, you can still score the articles for $1 a month. That’s less than a bottle of water in most places. The articles are of a great quality and EN World creator, Russ Morrissey, writes several of the best articles. You can grab some sample articles and an adventure for free so check it out.

I also have to give a special shoutout to EN5ider editor, James J. Haeck. He’s brilliant, creative, and a blast to work with. Every letter that man touches becomes better for it and this series of articles would be a lot worse without his input.

I think you should definitely checkout my latest article and all EN5ider has to offer. In fact I’m going to give you a little preview right now. Below is the Master of Nature, an NPC that was cut from the article for space. If you like this NPC, you’ll definitely enjoy the rest of the ones the article has to offer.

Medium humanoid (any race), any alignment

Languages Druidic plus any three languages

Magic Weapons. The master of nature’s weapon attacks are magical, even when polymorphed by its Exceptional Polymorph trait.

Would you like this NPC in a PDF along with all the other fifth edition D&D baddies I’ve designed? Grab them below.