This is a guest post from Geoffrey Winn, host of the amazing Appendix N podcast on The Tome Show network. Geoff was on a recent episode of my podcast, The Round Table, where we chatted about what it would take to create a Middle-earth campaign setting for fifth edition Dungeons and Dragons. That conversation inspired this series of posts here on World Builder Blog. 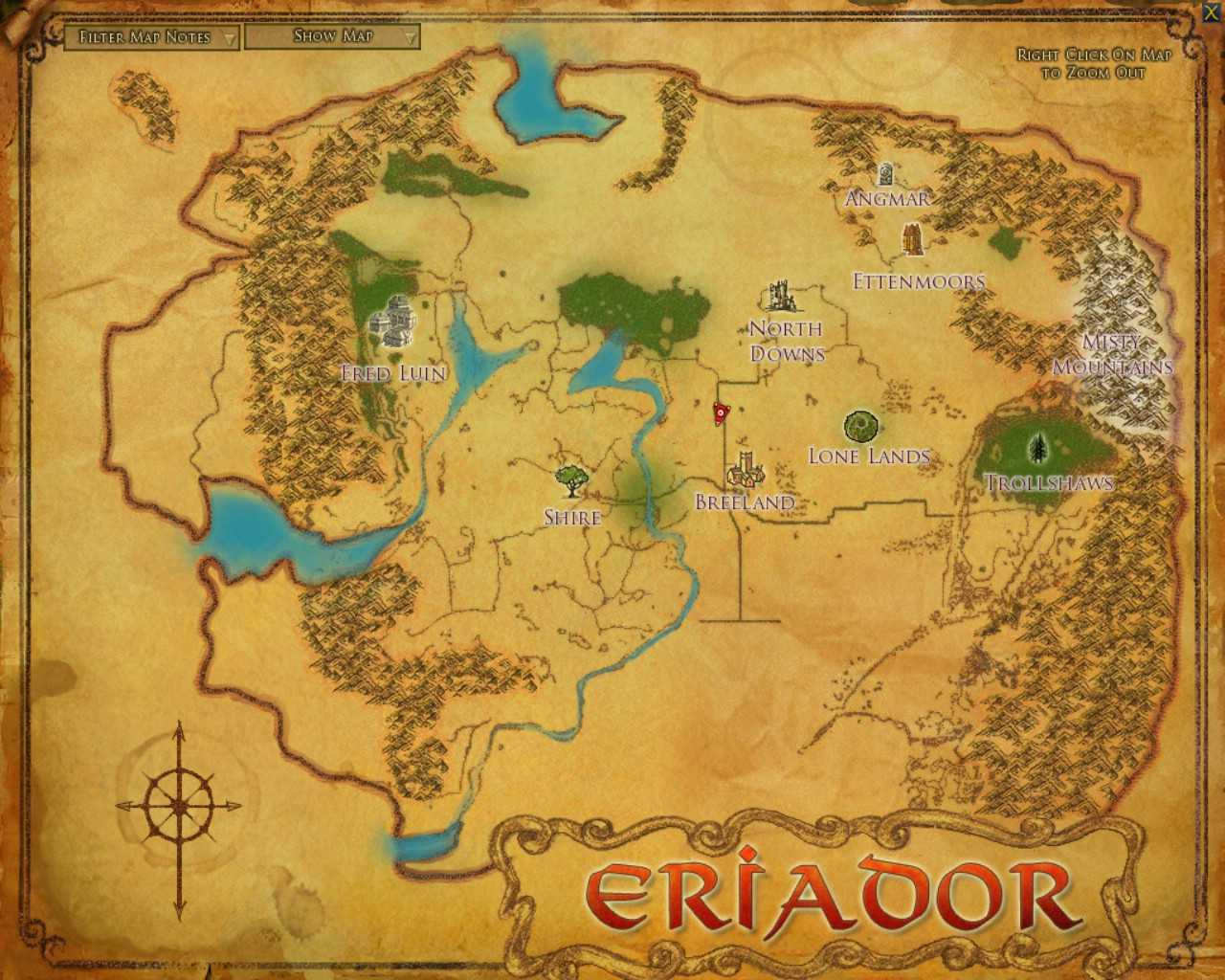 Part I: Introduction & The Region of Eriador

Hey folks. After my talk with James on the D&D Round Table about the upcoming Dungeons & Dragons/ Middle-earth gaming products from Cubicle 7, I realized there was a lot more I wanted to talk about. I’m a huge fan of both Dungeons & Dragons and Middle-earth, and the question of how to run a D&D game in my favorite fictional setting has long been on my mind.

In this blog, I will focus on general ideas for adapting your favorite role-playing game, whatever that happens to be, for Middle-earth, and vice versa. I’m going to largely stay away from talking about game mechanics. Trying to create a role-playing game that is faithful to the source material while also being fun to play is a huge challenge, and not one I particularly want to tackle at the moment. Instead I want to talk about how you can take games that you already know how to play, already know how to design adventures for, and set them in Middle-earth.

When planning your campaign, you’ll want to think about where and when your campaign will take place. Middle-earth can be broken up into three distinct geographical areas, each of which can yield up different flavors of game. These areas are Eriador, Wilderland (also called Rhovanion), and Gondor. For my first post, I am going to talk all about Eriador, where all our adventures begin.

Eriador: This is the area west of the Misty Mountains. It literally means “empty land,” and by the time of The Lord of the Rings, this is a pretty accurate name. Most of the people were killed or driven out of Eriador after the Witch-King destroyed Arnor, the North Kingdom.

Eriador includes the Shire, Bree, Rivendell, the Grey Havens, and the Blue Mountains. What’s more, all of these are connected by a major road that runs straight across the region. This gives you an opportunity to include Men, Elves, Dwarves and Hobbits in your campaign.

Early Third Age: Early in the Third Age, most of the region is controlled by the Men of Arnor, the North Kingdom of the Dúnedain. The society of Arnor should resemble that of Gondor. The capital was a city called Annúminas, and it probably looked a lot like Minas Tirith, except it was built on a lake. The Dúnedain are brave, powerful Men who bring light to the darkness and civilization to the wilderness. They are staunch opponents of Sauron and Sauron’s minions. However, evil forces did not begin to taint the region until after Arnor had broken up into three separate kingdoms, which I’ll talk about below. The time of Arnor was therefore relatively peaceful, and any conflicts would largely be the invention of the GM. The most notable thing about Arnor was that its kings were descendents Isildur, the man who defeated Sauron at the end of the Second Age. Isildur never returned to Arnor to rule, but was instead slain by orcs on the road home.

Middle Third Age: After the death of its tenth king, Arnor was split between the king’s three sons. Three new kingdoms emerged – Arthedain, Cardolan and Rhudaur. Arthedain can basically be seen as “the good guys,” the people most closely aligned with the vision of the original Dúnedain kingdom. The capital of Arthedain is Fornost, a fortress that sits north of Bree. Rhudaur quickly degenerated into a society of dark sorcery and barbarism. Cardolan, which contained the village of Bree within its borders, was somewhere in the middle. It was populated by decent, hardy folk just trying to survive. The Witch-King of Angmar looms as a threat over everything. Over a period of roughly 1000 years, the Witch-King conquered and destroyed all three of these kingdoms.

In a campaign during this time, PCs can be brave knights and allies of Arthedain and Cardolan, defending the land from evil plots out of Rhudaur and Angmar. Although the land is doomed, people can still be saved and knowledge and magic can be preserved for future generations. Perhaps in your campaign, you allow the PCs to actually defeat the Witch-King, significantly altering the history of the North.

Late Third Age: After the fall of Arthedain, the region becomes much different. The Witch-King’s victory was short-lived. The year after the Witch-King took Fornost and drove off the last of Arthedain’s kings, a combined force of Elves and Men of Gondor arrived. They utterly destroyed Angmar and drove the Witch-King out of the North. All that was left was a wilderness full of ruins, populated by scattered civilizations with tenuous connections to one another. The descendents of Isildur survived to become the Chieftains of the Rangers. This time period most closely resembles a typical campaign setting for Dungeons & Dragons.

As stated at the beginning, we have a string of small civilizations connected by a road that mostly travels through wilderness. Dwarves travel along this road from the Blue Mountains to the Misty Mountains, bringing trade goods and news. There is also the Greenway, a road that runs north to south and crosses the Great East Road just outside of Bree. This makes Bree the ideal starting point for any campaign, a place where Dwarves, Hobbits and Rangers can meet.

The Rangers make an ideal support organization for your campaign. They are unquestionably the “good guys,” patrolling the wilderness, saving people from monsters, and taking no credit for their actions. Their main goal is to preserve the ruins of the old kingdoms, knowing that one day a king will return and restore prosperity to the region. In a campaign that takes place in this time period, the PCs are either Rangers themselves or work for the Rangers. Alternatively, the PCs could simply be treasure hunters who care nothing for history, which would make the Rangers an enemy.

The area is rife with dungeons that can be explored for treasure. The Barrow-downs and the Old Forest are iconic locations from The Lord of the Rings that players will instantly recognize. There are also the abandoned cities of Annúminas and Fornost. Perhaps descendents of the evil hill-men of Rhudaur still survive, hatching devilish plots in remote locations. During the long war with Angmar, the Witch-King probably sent many minions into the region who could have built dungeons in hidden locations. Those dungeons are still there, and either they are still inhabited or they are long abandoned, but they are definitely full of danger and treasure. Angmar, of course, is likely full of abandoned fortresses containing dark magic items and weapons of war that bad guys might want to claim for themselves. Finally, the PCs could be sent into the Mines of Moria or the goblin caves of the Misty Mountains for any number of reasons, likely to find death at the hands of orcs, Gollum, or the Balrog.

Far to the south of this region are a few areas that deserve special mention. They are rather obscure locations, far removed from the major events of The Lord of the Rings and The Hobbit. This makes them exciting locations to use in a campaign, because the GM and players are free to make up whatever they want.

The first of these is the town of Tharbad. This town lies far to the south of Bree, along a road that once connected Arnor and Gondor when both were prosperous kingdoms. When Arnor was destroyed and Gondor became less and less influential in the world at large, Tharbad was largely abandoned. In The Lord of the Rings, we hear a report from Boromir, who passed through the town on the way to the Council of Elrond, that nothing remains of the town except a crumbling bridge over a river.

In your campaign, Tharbad does not have to be abandoned. It could be home to brave, hardy Men, similar to the Men of Bree or Lake-town, trying to eke out a living in a harsh wilderness. It could be a den of thieves and brigands. It could be a stronghold or orcs or an evil wizard, someone as powerful as Saruman, who could be a threat to the peaceful people of the North if not stopped. Tharbad makes a great alternative starting point for your campaign if you want a darker game, or if you simply want to be closer to other areas like Rohan, Isengard, Moria and Gondor.

The other location I want to talk about is Vinyalondë, also called Lond Daer or Lond Daer Enedh. Vinyalondë was a port haven established by Tar-Aldarion, the sixth king of Númenor, in his younger days as a prince. The tale of Aldarion and his wife Erendis is told in Unfinished Tales, and I recommend you read it if you’re at all curious about Númenor and life in the Second Age of Middle-earth. For our purposes, however, Vinyalondë is simply a great adventure location. Númenor was a powerful empire of Men in the Second Age, and at one time they had explored the whole world. The ruins of Vinyalondë could contain just about anything, from lost magical treasures to horrible monsters that have been locked away. These ruins can be reached from Tharbad by sailing down the river. If the PCs are interested in a sea adventure, they can establish Vinyalondë as their home base, from which they could sail to the Grey Havens, Gondor, Umbar, or even more exotic locations.

So there you have it, my overview of the region of Eriador. Hopefully you’re already buzzing with campaign ideas. If you’re interested in any of the locations that I talked about and want to learn more, I highly recommend making your way over to http://tolkiengateway.net. It’s the most comprehensive Tolkien Wiki I have found, and it’s always my first stop when I’m doing research for a project.

In future posts, I will talk about Wilderland, the Gondor region, and locations that don’t fit neatly into any of these regions. But what else would you like me to talk about? What questions can I answer? I’m interested to see what problems others have had trying to set a campaign in Middle-earth. Thank you for reading my words, and thank you to James for giving me a place to post them.

Listen to Geoffrey Winn discuss the literature that influenced the creation of D&D every month on the Appendix N podcast on The Tome Show network!

Share this post:
« Round Table 112 – D&D in Middle-earth and Trail of the Apprentice » Adding Aberrations – The Hound of Tindalos