This is a guest post from Geoffrey Winn, host of the amazing Appendix N Podcast on The Tome Show network. Geoff was on a recent episode of my podcast, The Round Table, where we chatted about what it would take to create a Middle-earth campaign setting for fifth edition Dungeons and Dragons. That conversation inspired this series of posts here on World Builder Blog. If you enjoy this post, check out Part I: Introduction and the Region of Eriador, Part II: Wilderland, Part III: Gondor, Rohan, and Mordor, Part IV: Other Places, Other Times, and Part V: The Lords of Middle-earth.

Part VI: The Lords of Middle-earth – The Mannish Races 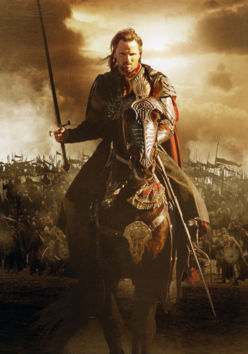 Give me some men who are stout-hearted men,

Who will fight, for the right they adore.

Throughout this blog I have talked about Men more than any other race, and so you may be wondering what there is left to say. Why an entire article? Despite J. R. R. Tolkien’s most famous novels being from the point of view of hobbits and despite The Silmarillion being mostly about the Elves, it is Men who dominate Middle-earth. From the Second Age onward, it is Men who drive history forward and define the political landscape.

Tolkien preferred to use the terms “Man,” “Men” and “Mannish” (yes, a real word in the dictionary and everything) when talking about the human race. He probably preferred to use these words because of their German roots; he disliked anything having to do with Latin. These words apply to the entire race (i.e., “mankind), not just males. When talking about female humans, it is most appropriate to simply say “Women.” Always capitalize to make it clear you are talking about the race of Mortal Men and Women, not males and females of another race.

Was Tolkien a bit sexist? Probably. He was a conservative Catholic man who lived in the early 20th Century. Most of his friends and professional colleagues were probably men, and as critics will point out, female characters are few and far between in his works. All this is to say, if you find it inappropriate to say “Men” all the time in your roleplaying group, you can say “Mortals” or “Humans” or whatever you like. You don’t have to do it the way Tolkien did.

When Eru Ilúvatar (a.k.a., “God”) created the world, he told the Valar about two races that would appear at some point in the world’s history – Elves and Men. The Valar were fascinated about these races, primarily because Eru had told them almost nothing about them. Just like fans waiting for their favorite author’s next book to come out, they went down into the world and eagerly waited untold numbers of years to see what they believed would be their Master’s finest creations.

Elves were interesting because they talked, and nothing had ever done that before. Elves wrote poetry and songs and built amazing things. To the Valar, they were like little siblings, sometimes rebellious, but still very close to themselves in nature.

Men were interesting because they did something the Elves did not do; they died. Despite the fact that plants and animals also died – and Elves, too, if you hit them hard enough – Men did it better than anything else the Valar had seen. Over and over again. In spectacular fashion. Death was called the “Gift of Men,” a gift from Ilúvatar to his Secondborn Children. When Elves died, their souls traveled to the Halls of Mandos, from which they could be revived. However, when Men died, they left the world entirely, and even the Valar did not know what happened to them.

Death, and the fear or acceptance of it, was a major theme in all of Tolkien’s writings; and I would argue it was a major theme in his life. By the age of 12, Tolkien had lost both of his parents. He fought in the Somme during the Great War, and by the end of that conflict, all but one of his friends was dead. His writing, his art, and his poetry was, among other things, an attempt to cope with the horrors of death.

It’s also important to remember Tolkien’s Catholic faith and that Tolkien’s stories are taking place in a world that predates Abraham. The ideas presented in the Bible about Heaven, sin, redemption, etc., haven’t been revealed to anyone yet, probably not even the Valar. This gives Morgoth (and later Sauron) ample opportunity to control Men through lies about death and what it means for their souls.

To play up this angle, Men in Middle-earth should be weak against necromancy and undead. They should have penalties to saves against fear effects, death effects, and anything that reminds them of their own mortality.

Men in the First Age – The Edain and the Easterlings

The stories of the First Age in The Silmarillion pretty much exclusively take place in Beleriand. Tolkien describes Men migrating west from Hildórien, a place to the far east that does not appear on any map. Presumably the Middle-earth we know from the Third Age lies to the east of Beleriand, but none of the nations we know of exist yet. Outside of Beleriand there are simply primitive tribes of Men wandering about, running away from monsters and Elves alike.

“Edain” is the plural; “Adan” is the singular.

The Easterlings seem to have arrived in Beleriand later, and they were mostly (though not entirely) servants of Morgoth. Confusingly, the Easterlings of the First Age have nothing to do with the Easterlings of the Third Age, described in previous blog articles. These Easterlings are also called Swarthy Men because they had dark skin, eyes and hair. They come across as more brutish and less cultured than the Edain, typical of Tolkien’s “bad guy” races.

Because everything about the First Age is bigger, badder, more epic, Men of the First Age should start out with extra hit dice, levels, ability score bonuses, or all three. They should be less powerful than the godlike Elves, but they should still be able to stand up to giant monsters. Men of the First Age generally serve an Elf-lord, and they would go on missions for him. They may be outlaws, like Túrin Turambar; or, like the House of Haleth, they may be trying to fend for themselves in a small community in the wilderness.

Men of the West – The Númenóreans and the Dúnedain

As a reward of their service to the Elves, the Edain were blessed with longer lives, greater physical attributes, and they were given the island of Númenor to rule. Eventually, the Númenóreans built ships and explored the entire world, creating a vast empire. The fear of death was their downfall. Even with their long lives, the Númenóreans grew jealous of the immortal Elves. Sauron lied and manipulated the last King of Númenor into sailing west in an attempt to conquer the Valar. As expected, this failed; Númenor was destroyed. The survivors were either Dúnedain (good) or Black Númenóreans (evil).

Dúnedain culture was essentially a continuation of Númenórean culture. In the Third Age, they built two great kingdoms – Arnor and Gondor. As has already been covered elsewhere, the story of the Third Age is largely about how Sauron gradually ground these two kingdoms to dust, until they were almost too weak to oppose him… almost!

“Dúnedain” is the plural; “Dúnadan” is the singular.

The Black Númenóreans ruled the Havens of Umbar for a little over a thousand years into the Third Age. Although they’re not really mentioned after that time, it’s entirely possible that Black Númenórean villains were running around doing evil things right up until the War of the Ring, acting as a dark mirror to the Dúnedain. There were probably not very many of them, not enough to be whole nations unto themselves. Instead, imagine a few, small families clinging to their old, evil traditions, ruling the lesser Men of the South. The Mouth of Sauron is sometimes interpreted as being a Black Númenórean.

All three of these groups – the Númenóreans, the Dúnedain and the Black Númenoreans – should be considered their own race, separate from other Men. I will simply use “Dúnedain” to refer to all three of them. They should be given higher ability scores, extra feats and skills, bonuses to saving throws and the like. Their strengths and their lifespans seem to be partially tied to their own purity of spirit. In other words, a Dúnadan’s inner strength will manifest outwardly as physical strength, good looks, and long life. Dúnedain also seem to have a talent for magic, at least in the Second and early Third Age. Most of the colossal statues and cities in The Lord of the Rings were built by Dúnedain. Isildur was able to curse an entire civilization into 3000 years of undeath for betraying him.

Their fear of death is even more pronounced. Tolkien describes how the latter Númenórean kings and the Gondorian kings and stewards would sit and brood upon their own deaths, spending more time building elaborate tombs and monuments to themselves than ruling. Tolkien seemed to find “dotage” more appalling than death – the idea that a Man would continue to live long after losing his mental and physical abilities. To this end, Aragorn had the ability to choose the time of his own death, to simply will himself into the afterlife, to avoid this fate. It is possible that other Dúnedain had this ability, or even all of them.

Lesser Men of the Third Age

The Dúnedain used the term “Middle Men” or “Men of Twilight” to refer to other types of Men that weren’t actively trying to kill them – the Rohirrim, the Bree-folk, and the Men of Dale, to name a few. The enemies of the Dúnedain were called “Men of Darkness” or “Men of Shadow.”

Mechanically, there is no reason to differentiate between all these different peoples. Simply use the “Human” rules for your game. Add backgrounds, traits, skill bonuses, or whatever your system uses to suggest the culture they come from. The same thinking applies to the Edain and Easterlings of the First Age, although as previously mentioned they should be given extra hit dice or levels to reflect the dangerous world they live in.

The Woses, also called the Drûgs or the Drúedain, are a special category. They are ugly and brutish, which is unusual among Tolkien’s “good” races. They are present in all ages and live pretty much wherever there is a forest. Woses should be physically weak and not very adept with arcane magic, but they excel at stealth, forestry and druidic magic.

Hobbits are also possibly related to Men. They first appear in the Upper Anduin Vale in the middle of the Third Age, living very close to the fierce Northmen and the savage ancestors of Beorn. While traveling through Rohan, Merry Brandybuck notices that the language of the Rohirrim bears a striking similarity to the old language of the Hobbits – of course Tolkien would choose to make one of his heroes a language enthusiast like himself!

I hope this article has been enlightening and entertaining, and not too redundant. While I have talked about a lot of these subjects when covering the various realms inhabited by Men, I felt an article about Men as a race was still needed. My next article will be about Hobbits, Dwarves and whatever other races I can fit in!

Part I: Introduction and the Region of Eriador

Listen to Geoffrey Winn discuss the literature that influenced the creation of D&D every month on the Appendix N Podcast on The Tome Show network!

Share this post:
« Round Table 118 – Magic in D&D, Acquisitions Inc. Series, and Gem Dragons of Faerun » Have Spellbook, Will Travel – BTS Podcast #1