A few months ago, I wrapped up my first Exploration Age campaign. One of the final villains the characters faced was She’baz, the original aberration that birthed all other aberrations in the Far Realm. What exactly is she like? How tough is she? Read on to find out!

A flying tarrasque-sized mass of mouths, tentacles, and eyes, She’baz is the mother of all aberrations. The chorus of discordant screams that announce her arrival melt all but the strongest minds. Her tentacles can easily break the necks of elder wyrms. Those that do not die bend the knee to her will. The Aberrant Queen will enslave the multiverse that is rightfully hers.

Origin Unknown. None know the true origin of She’baz. Some say she was once a power-hungry deity who desired the death of all others so she could be the sole god in the multiverse. Others believe she is a horrid weapon of the gods, one so powerful even they could not control it. Some believe she is older than the multiverse itself, coming from some other place beyond the planes, a conqueror with a single goal – rule everything.

Power Above All. She’baz desires power above all. She believes that as one of the strongest and smartest beings in existence, it is her right to rule. Her conviction is that as the most intelligent being, her rule would benefit all in her domain, even if their simple minds cannot accept the true queen of the multiverse.

The original aberration stops at nothing to achieve total reign of the multiverse. There is no being she does not try to bend to her will and has no problem obliterating those who do not accept her as the one true power. Creatures who serve her do so with utter devotion, gladly giving their lives to her cause, knowing their sacrifice and She’baz serve the greater good.

Mother of Aberrations. From She’baz the first aberrations sprung forth. Into them she poured her appearance, her paranoia, her lust for power, and her cruelty. Aberrations are her pride and joy who do anything for their mother. Even the most self-serving of aberrations bow to She’baz and carryout her will if it is demanded of them.

Lost in the Far Realm. As She’baz began to conquer the multiverse, she started with a material plane that’s original history and appearance has since been long forgotten. The gods, unable to destroy She’baz, separated this plane from the existence of the rest, creating the Far Realm. The mother of aberrations is imprisoned in a single plane she controls with many of her children, and desperately searches for a way to rejoin the Far Realm to the rest of the multiverse, so that she might rule all that is rightfully hers.

Some of She’baz’s children were scouting other planes when the Far Realm was separated from the multiverse. These scouts are the ancestors of the aberrations that wander other worlds. While the present-day descendants have never seen She’baz, stories of their glorious queen have been passed down, and the aberrations scattered throughout worlds await her return. Some even try to engineer reconnecting the Far Realm to the rest of the multiverse.

Grab the PDF below or on the Free Game Resources section of this site any time.

I’m off on my honeymoon this week, so this post is brought to you by Matthew Meyer.

Matt is an amazing artist who drew a rendition of She’baz, Queen of Aberrations, who shall be detailed in a blog post next week. Below is some preview art… but something even more terrifying is coming…. 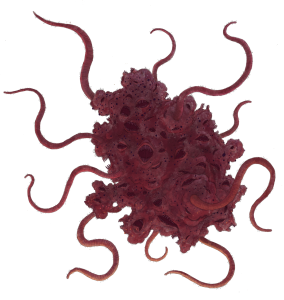