If You Stat It, They Will Fight It 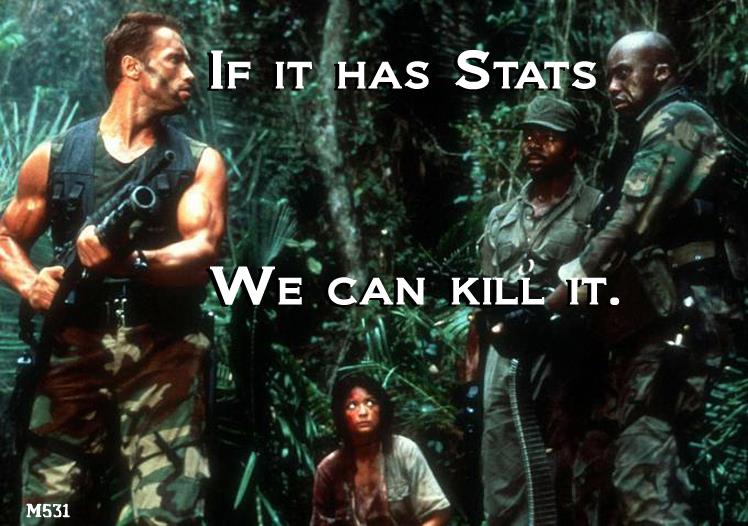 I heard that a lot last week.

I’m creating a holiday themed adventure for the season and kicked it off with two different blog posts where I showed off Santa Claus and his crew. There was a lot of people responding with the joke above saying, “Don’t give Santa stats! Then your players will kill him!” Here’s the thing though – I want Santa to have stats so he can fight the PCs.

There’s really only two practical reasons to give a creature combat statistics in Dungeons and Dragons.

The third (and somewhat impractical) reason would be that it’s just fun to create stats. I digress. In my case I designed Santa and his minions because my group of players is going to take him on in a holiday themed royal rumble. Why? Well check out the adventure background and synopsis below.

I should also mention that this blog post is part of this month’s RPG Blog Carnival, which is being hosted right here on this very blog for all of December. The theme is “Homebrew Holiday Gifts.” I’m asking bloggers everywhere to share their RPG creations for their favorite systems with me. At the end of the month I’ll make a list linking all participating blog posts so everyone can checkout the fine homebrew creations in one place.

Happy Holidays is a short fifth edition adventure for four to six level 20 characters. The adventure assumes the high level characters are well known throughout the land.

It is a time of evil at the North Pole. Santa’s workshop, normally a cozy den of cheery work ethic, has been plunged into darkness. Santa, Mrs. Claus, and many of their friends and guardians at the North Pole are under the influence of an evil empyrean with an axe to grind named Narese Lathanya.

It all began centuries ago, when Santa put Narese on the naughty list for the murder of her sister. Narese’s twin, Bellatros, bested her in a contest of strength. The gods awarded Bellatros with a crown of bewitching enchantment which allowed her to charm others. In the night jealous Narese killed her sister as she slept and took the crown as her own. Santa, who sees all, moved Narese’s name over to the naughty list at once. Coal began appearing in Narese’s holiday stocking and she swore Santa would pay.

For the next three hundred years, Narese traveled back and forth across the North Pole searching for Santa’s workshop. Tried as she might, she could not find the place. Santa’s magic shields the workshop from the eyes of evil beings. Frustrated by the uselessness of her labors, she took a different tactic. She visited scholars across the land and using her crown persuaded them to tell her all they knew about Santa. She learned that any letter or package addressed to Santa by a child pure of heart would magically arrive in the workshop next day. She found an enormous box and an innocent little boy who fell under the sway of her crown. The next day she was inside Santa’s workshop.

Once inside Narese took control of Santa and Mrs. Claus’ minds with the crown of bewitching enchantment. This magic trickled down through Santa to the Winter elves and guardians of the place. Narese, jealous and eager to punish those on the nice list, had Santa switch the names with those on the naughty list. The empyrean charmed Santa into sending all creatures on the naughty list dangerous and explosive coal for the Winter holidays.

The characters get wind that something is amiss in the North Pole by getting their own explosive coal and then hearing about similar incidents throughout the land. Based on their reputation for past deeds the children and parents of the world write to the PCs and ask them to save the Winter holiday. From there the characters travel or teleport to the North Pole, storm Santa’s workshop, fight the man himself, and confront Narese to break her hold over the jolly celestial.

Making Santa Work in Your Game

In the real world Santa Claus is a mythical creation who gives well behaved boys and girls presents during the Christian holiday of Christmas. Your own game world may not have Christianity as a religion and thus there is no Christmas in the world. Fear not! Santa isn’t so tied to religion that you can’t play this adventure. Instead use the Santa lore below to work him into your world and have him deliver gifts on any Winter holiday, harvest, or even the solstice.

Blog note: Santa’s lore can be found in this blog post.

Hook: Blow Up the Holidays

The PCs awake on a Winter holiday to find presents placed at the foot of their beds. Santa has been there! As the PCs open their presents they find each perfectly wrapped box contains a single lump of coal. The coal explodes, dealing 1 fire damage to the person who opened the box. While this isn’t a huge problem for the PCs, good creatures everywhere are opening similar boxes and getting the same surprise. For some, like younger children, the results are serious injuries.

The PCs get word or witness this curious occurrence. They also get wind of naughty children and evil creatures being rewarded with toys and beautiful gifts. Cheating spouses, thieves, and politicians all sport new jewelry, clothing, and more. One of the PCs’ evil enemies might resurface with a new magic item given as a gift from Santa.

The next day a mail carrier comes to visit the characters with letters from parents and children throughout the land, begging the well-known band to investigate what happened to the Winter holiday. What’s wrong with Santa? Can the characters please find out? Describe letters from children who might draw crude pictures of the PCs riding around in Santa’s sleigh, drinking hot chocolate with Winter elves, and opening gifts. Parents may call for the head of Santa or have more anger in their letters demanding justice for the exploding coal which ruined their holiday. These can be humorous letters, but should get the PCs moving to the North Pole. If they need more of an incentive, a wealthy individual could offer them lots of gold to look into the matter or a kindly wizard could offer each character a magic item from her collection in exchange for finding out what happened to Santa.

Getting to the North Pole

At 20th level the characters probably have a few options for traveling to the North Pole. They can teleport or use other magic to get their quickly. Maybe they own special mounts or a fantastic vehicle like an airship. They might have a powerful friend, like a silver dragon, who offers to fly them North to investigate what’s happening. You might even allow characters to use the same technique Narese did and have them find a child who agrees to mail them to the North Pole.

Of course your party could end up traveling one of the more mundane ways to the North Pole. On foot, on mounts, or by ship. If this happens feel free to play out the trip and roll for random encounters along the way. Odds are this will be a very long journey if magic doesn’t speed it along, so be sure that’s the kind of thing your group will enjoy before you dive headlong into lots of walking and random battles.

Share this post:
« Round Table 98 – D&D in VR and at Gamehole Con » The Night Santa Went Crazy