Where can you find me at Gen Con?

I’m back in Indianapolis at Gen Con for the third time in a row and there’s more opportunities than ever to see Rudy Basso, Jeff Greiner, and me.

Where Can You Find Us at Gen Con

Also if you want to play a D&D Adventurers League adventure I wrote for Baldman Games, check out this event:

There’s more to come for Gen Con! Hope to see you at one of these places.

I’ve been very busy lately! Wanna know why? Let’s talk about conventions! I don’t just mean IntroConso. Read about where you can see me and play adventures I’m writing below!

Roll20CON is a free, online-only celebration of the Roll20 Community will take place on June 3rd, 2016 for just 24 hours – but you can start preparing, listing, and joining games now! From 12AM – 11:59PM Pacific time, there will be games galore played on my favorite virtual table. You’ll want to join in the action and get to try some of the Plus and Pro subscription features for free. That’s right. Dynamic Lighting (and tons of other awesome features) will be free during Roll20CON.

During the convention, some of your favorite streamers, publishers, podcasters, and I will be live on Twitch helping raise money for Cybersmile, the international non-profit supporting victims of cyberbullying.

If you haven’t seen the schedule for Roll20CON check it out below. 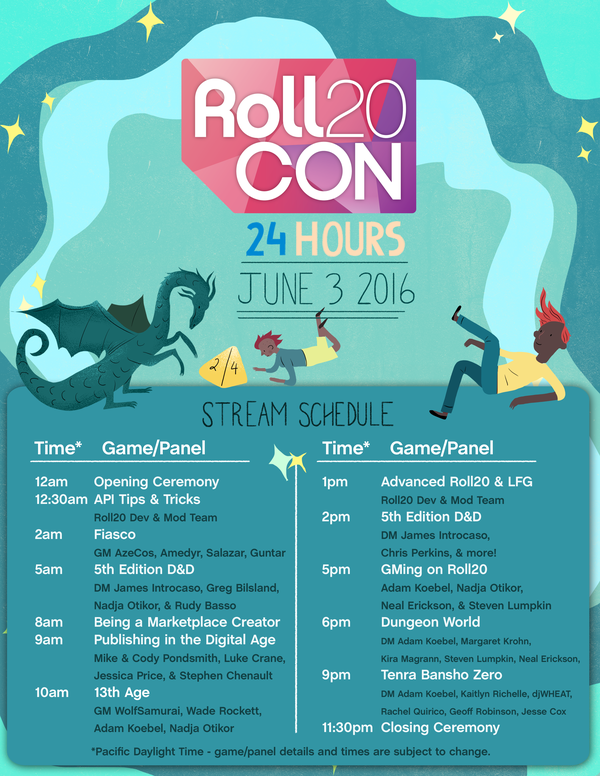 You’ll notice I’m running two games during the 24-hour live stream. You’ll also notice some of the biggest names in Dungeons and Dragons including my good friend Rudy Basso of the Tome Show’s D&D V&G podcast and Have Spellbook, Will Travel, Nadja Otikor of Misscliks D&D Prophecy, Greg Bilsland of Wizards of the Coast and member of the Dungeons and Dragons team, and, oh yeah, Chris Freakin’ Perkins, a Wizards of the Coast D&D employee who needs no introduction. 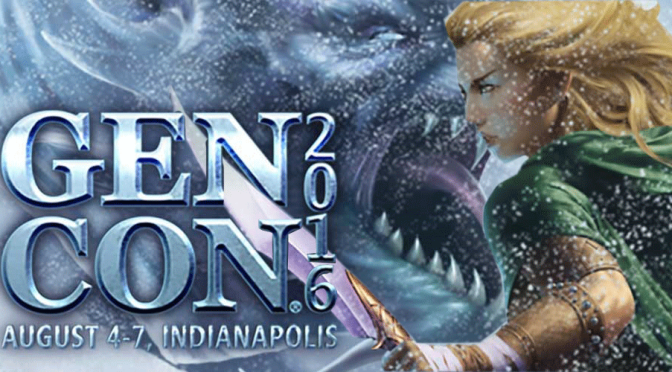 I’m back in Indianapolis at Gen Con for the third time in a row and there’s more opportunities than ever to see Rudy Basso, Jeff Greiner, and me.

Where Can You Find Us at Gen Con

Also if you want to play a D&D Adventurers League adventure I wrote for Baldman Games, check out this event:

There’s more to come for Gen Con! Hope to see you at one of these places.

My day job relates to tabletop RPGs. I am a writer/producer of short videos. Mainly I do television promos for networks in the Washington, DC area where I live. I also do corporate videos and non-profit stuff. It doesn’t matter if the piece is driven by existing footage, graphics, music, or a shoot I set up with a tam. If it’s a short video you want, I know how to write it and create it. You can already see the connection to RPGs. I tell stories (albeit mostly 30-second ones) for a living.

Before promos and other marketing videos were my job, I worked in long-form television (or as most people call it – television shows). While short-form is wonderful in a lot of ways (you’re never bored because you’re always working on something new), I want to get back into long-form storytelling. Actually I want to do something I’ve yet to do. I want to be a showrunner and head writer on a TV show.

I was working at National Geographic when my good friend Jay Letchko asked me to help him write a pilot. His idea had superheroes, comedy, and an original take. Knight Birds is a series about two superheroes protecting Venture City from ridiculous villains with insane (but hilarious) schemes. Villains like the Jacked Rabbit, a body builder who is always trying to revive his beloved, deceased bunny, and the Cantibal, a woman who thinks eating other humans will give her great strength but can never bring herself to do so because it’s gross. While their actions are silly, the danger is real. This isn’t Adam West’s Batman or Pete Holmes’ Badman (though both are awesome). It’s something new and a little different. Turns out that’s a difficult idea to get across. Let me break it down with visuals.

Knight Birds is about superheroes who look like this… 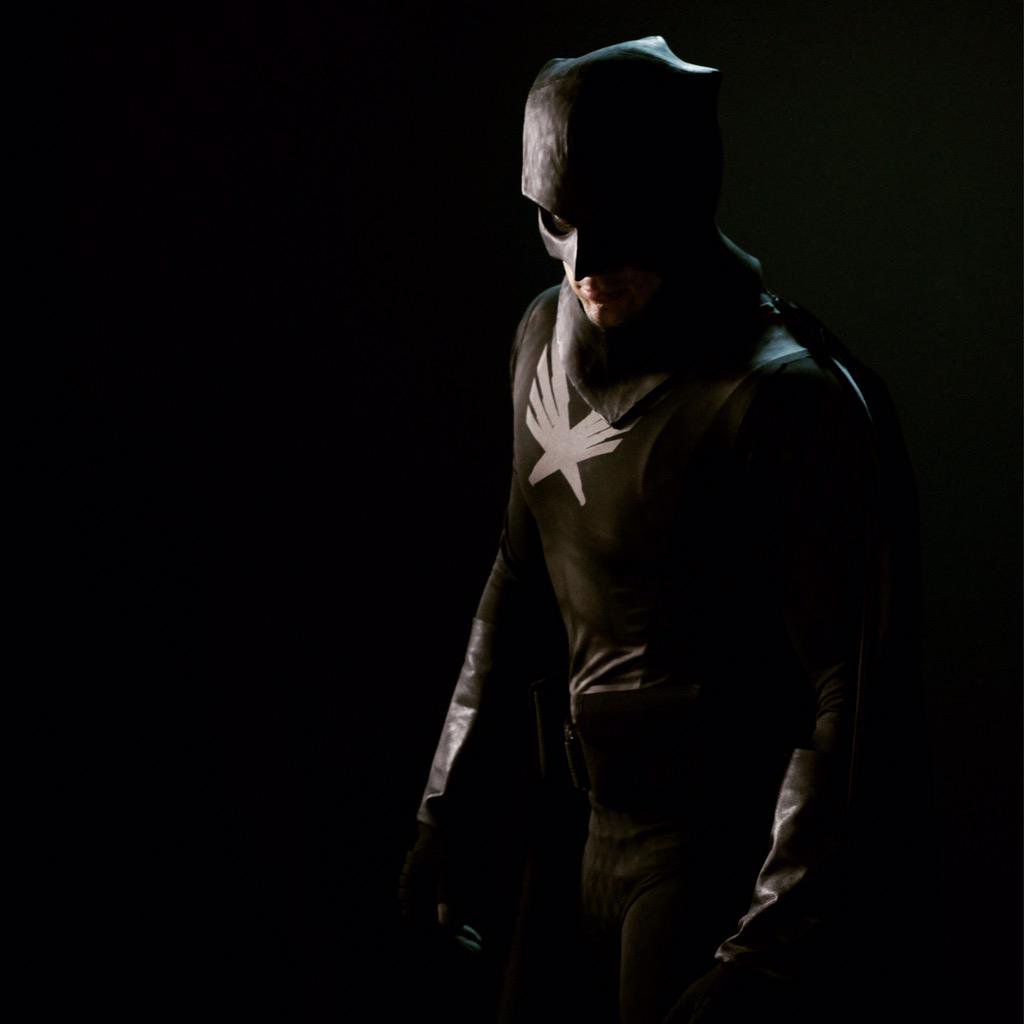 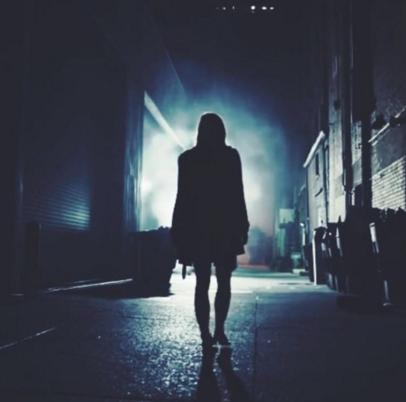 Our pilot script is great! We really love it and so do many of the people we showed it to, but they didn’t seem to understand the setting. The world takes itself seriously. The characters take themselves seriously. The audience isn’t really supposed to take anything seriously. If we just had the money and time to shoot the pilot we could communicate that.

We obviously didn’t, but we did have enough cash to make what’s called a proof of concept – a short video that gives people an idea of what the series can be. We teamed up with our good friends at Evolve IMG to help us nail the visual style. These guys are master cinematographers who can run-and-gun better than anyone in the business. I’m lucky to even know these dudes, let alone work with them on a dream project. Similarly our sound was done by a killer engineer at Clean Cuts – one of my favorite audio houses ever. They (literally) rock!

The objective was simple. Make a less-than-3-minute video that introduced people to the world and feeling of Knight Birds. We’d put the video online and show it to friends who work in the industry. Hopefully people love Knight Birds and share it.

Well we made the thing. Take a look at the short video below. If you like what you see please share the video on social media! It’ll take no time at all and be a big help to us.

How does all of this relate to RPGs?

Tone is super important in RPGs and it is up to the GM to begin every session by setting that tone. Not only is there a big difference in tone between campaign worlds (e.g. Eberron vs Ravenloft), there can be a big difference in tone between adventures within the same setting (e.g. a tense delve into a dragon’s lair vs a thrilling murder mystery on a moving lightning rail). The faster you set the tone as the GM, the more immersed your players become in the world. The players will also understand your world and act appropriately within it. A PC is less likely to make fart noises at a beholder who is supposed to be scary if you make the creature scary from its introduction.

Here are some tips we used when creating our Knight Birds proof of concept that I also use when I’m setting the tone in my games.

In Knight Birds we had to make our city gritty from the first shot. Harsh lighting, fog, and a back alley immediately establish Venture City as dangerous. The sound effects of sirens and car alarms in the distance contribute to the feel of the place as crime-ridden. As the film goes on we see Deadbeat Dad looks like his namesake and the Knight Birds look and sound like badass superheroes. When less-than-3 minutes is up, you know you just went to a dark, gritty superhero world.

The same should go for your descriptions of events, characters, and places in games. In television we can only tap into two senses – hearing and sight. At the table you can tap into all five and should. Describe the way the stagnant air of a tomb tastes, the feel of spongy ground beneath the PCs’ feet, the smell of rot burning their noses, the faint sound of a far away mournful wind moaning, and demonic shadows dancing at the edge of their torchlight. The more you can describe the way the characters sense, the more the players will actually become immersed in your world by feeling those things.

The actions your characters take also help establish the tone in your world. Deadbeat Dad doesn’t hesitate to resort to violence when an innocent person won’t “loan him five dollars.” Our innocent victim simply sneaks off when the heroes and villain face each other in a dramatic stare-down. The Knight Birds defeat Deadbeat Dad with a cunning plan but let him think he was winning because “it was more dramatic that way.” The actions of characters reinforce the idea of a gritty world and introduce a new layer of complexity to Knight Birds. Everything is so over-the-top that it’s actually funny.

You have the same job as a GM when it comes to NPC actions. Those PCs in the tomb could have a night hag tormentor in the shadows who cruelly teases them at every turn before finally revealing herself. NPC companions and pets could shift uneasily or even run terrified from the place at the first sign of danger. Ghoul henchmen feast upon a fresh humanoid corpse when the PCs approach.

A picture is worth at least 1,000 words. As video Knight Birds relies on visuals to get a lot of its storytelling done. When we first meet the titular characters we see them run through a series of iconic superhero poses so quickly and thoroughly that the sequence becomes a joke. This time it’s our visuals giving the audience the tone of the show.

If you run a published campaign you already have some visuals to show the players. If not you can draw or (better yet) do a quick image search and print out a picture, hold it up on a tablet, or throw it up on a virtual table. Visuals like this can immediately set the tone for the game you’re playing so pick them carefully. In our tomb example it’s better to pick a picture of a night hag that’s grotesque and unsettling than something cartoony and silly.

Music is a real mood-setter if ya know what I mean. The music in Knight Birds was done by the great Andreas Ahlm. Not only does his Zimmer-esque score remind you of dark superheroes in all the right ways, it also helps accent each joke with timing. It’s over-the-top, fun, and breathtaking. Those are all of the things I want Knight Birds to be.

I recommend you listen to music that helps set the tone during play. It’s a powerful tool that keeps your players immersed. Avoid lyrics where you can, since words pull many people out of the game. Movie and video game scores are a great place to start. Think of a movie or game with a tone that matches your game’s story, search for the sound track on Spotify, Pandora, or iTunes, and you’re good to go. Obviously for our tomb delvers we want something scary that isn’t silly. It’d be better to go with something like The Shining or Bloodborne than Beetlejuice.

Don’t forget to watch and share Knight Birds! Let me know what you think in the comments below.