Puzzles from Josh Long of Geekspective!

The most recent episode of the Table Top Babble podcast featured Josh Long and Amber of the Geekspective podcasts Evil is as Evil Does, Tales from Mauxferry, and Shapeshift about puzzles in RPGs. It’s a really good episode that changed the way I thought about puzzles in my games. After listening to the podcast, game designer MT Black asked for some more puzzle examples, which Josh provided. Then my good pal Ian Werth suggested we share Josh’s puzzles on this blog, so they all were neat and tidy in one place. So with Josh’s permission, here are his traps.

Layers: The characters must get through a locked door with six key holes. Six hostile statues or minions nearby hold keys with letters on them. The letters spell out SESAME. To open the door the keys must be placed left-to-right in the holes to spell the word then a character must say, “Open Sesame.”

Failure: Combat with the statues or minions continues.

Note: The characters could spend time disabling the door while being attacked.

Ways to delayer: Have the letters simply spell “OPEN” and lose the reference. Present the keys in the open before meeting the statues or minions.

Layers: The characters must cross an ice bridge shrouded in fog in a dungeon. A troll lives underneath the bridge and does not allow the characters to cross. Three varying sized goat statues stand at the entrance to the bridge. The characters find three spell scrolls of stone to flesh somewhere else in the dungeon and must use the scrolls on the goats from smallest to largest to defeat troll.

Failure: The characters have to fight troll to pass into the dungeon.

Note: There could be another way to go through the dungeon without crossing the bridge.

Ways to delayer: Present the scrolls in same room as the bridge. The goats defeat the troll no matter the order they are turned to flesh.

Layers: The characters find a wall carving of a scripture of Pelor with four words missing (his domains Good, Healing, Strength, Sun) in a dungeon. Four of the dungeon’s rooms connected to this chamber are mini puzzles or obstacles inspired by each domain:

Each room has the word on a plaque presented at the end of the challenge. Place the plaques in the correct order on the scripture and a locked door with a key hole, a large steel sphere made to look like a sun, and mirror suddenly appear. If the characters cast a light spell on the sphere and tilted the mirror so the light was reflected in the lock, the door would unlock.

Failure: Failing in the mini rooms resulted in combat with the room’s judges. The sphere consumed incorrect spells cast on it and monsters would arrive if the door was not open after a certain period of time.

Way to delayer: Get rid of the sun/mirror sequence.

Layers: In a mad wizard’s lab the characters find a room with two groups of shock lizards (one male and one female) producing electricity as a mating dance and separated by glass. The electricity powers the dungeon’s traps and other hazards. Elsewhere in the dungeon are pheromone producing machines. The characters must disable the machines in such a way that it does not harm them or cause them to fall in love with each other.

The characters could also use an electricity diverting machine with a series of complex levers with many combinations of lever positions (so many it may seem like a red herring). The electricity is diverted to different parts of the lab based on the levers’ positions, so it could help the characters to divert the power to other rooms, provided the path they take is one they have de-powered.

Failure: The characters could end up harmed, in love with each other, face combat with shock lizards, or alerts the mad wizard to their presence.

Note: This puzzle does not need to solved. It just de-powers encounters/traps higher in the wizard’s tower making it easier to traverse.

Inspiration: Heist to steal the hidden constitution in 1912 (Blades in the Dark Game)

Scenario: The characters are trapped in a sealed room with the name of the first eleven presidents of the United States of America on plaques in the incorrect order. They must order the plaques to escape the room.

Failure: Each submission of the wrong order does harm to everyone in the room as oxygen is being burned away.

Note: So far no one attempting this puzzle knew the order of all the presidents. Prompt players to use flashbacks to earlier in the score or in the characters life and have them describe how they remembered what number one of the presidents was. Characters take 1 Stress per flashback.

Josh says: Prompting players to use flashbacks and hearing their stories of how they knew was one of the most, if not the most fun part of running that one shot. (Hopefully this year I’ll publish that one-shot for others to play as well and enjoy!)

In addition to crafting cool puzzles, Josh is the DM of the Evil is as Evil Does and Tales from Mauxferry podcasts on the Geekspective network. Check it out. You will not be disappointed!

I sit down with game designer Monte Cook of Monte Cook Games to discuss the tenth anniversary of Ptolus, players and game masters sharing the cost for RPG products, Numenara, The Strange, Gods of the Fall, No Thank You, Evil!, Gen Con, and more. This podcast was recorded on July 8, 2016. 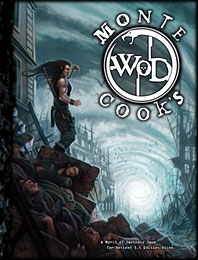 Round Table 92 – Prestige Classes and the Rune Scribe

November 2, 2015
A new episode of my podcast, The Round Table, is up on The Tome Show’s website.
I sit down with Allison Rossi, Joe Lastowski, and Topher Kohan to discuss the Unearthed Arcana article which gives us the Rune Scribe – fifth edition D&D’s first prestige class! This podcast was recorded on October 20, 2015.
Please rate and review us on iTunes, it helps a boat load!
Links:
The Tome Show on Facebook
The Tome Show on Twitch
Prestige Classes List
Topher on Google+
Topher on Facebook
Titan Games and Comics
Modern Myths Game Store
Acts of Geek
http://www.twitch.tv/padfoot240