Encounters in the Savage Cities And Other Announcements!

It has been a week! I’ve got a couple of announcements for today’s blog update that are sure to please!

But before we get to that, I want to thank all the folks who came to the DSPN Panel and after party hang at Gen Con. I cannot tell you enough what your support means to Rudy and me. You’re all shining stars! It was DOUBLY exciting to be at the panel, since it was the same day news of the Podcasts of Annihilation went live! Our very own Venture Maidens are part of a super duper exciting audio event organized by the Wizards of the Coast! If you missed the panel, subscribe to to the DSPN Presents podcast. We recorded the audio and will launch it there!

Encounters in the Savage Cities

I contributed to a new DMs Guild product put together by frequent Table Top Babble guest and game designer Jeff C. Stevens called Encounters in the Savage Cities. It’s description is below!

Ever needed to spice up a stay in a city?  Or, ever needed something to fill the gap between sessions when you are missing a player?  Add a little flavor to the adventurers’ city visits with a rampaging mummy, a circus gone wild, a haunted inn, and much, much, more.

Encounters in the Savage Cities includes:

These encounters are location generic and are designed to be easily added to any campaign.  Use them to introduce new players, as inspiration for a new campaign, as a one-shot, or whatever else you can think of.

You get all that for less than $7. That is a STEAL. You want this. It’s quality and will save your bacon when your players decide to explore a city instead of taking your offered hook. 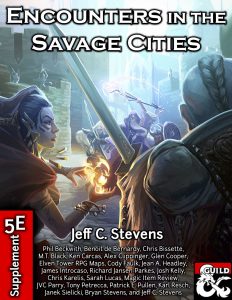 Aside from Jeff, this product features many other brilliant, best-selling designers, some of whom you may have heard on Table Top Babble before. Here’s the full list of them!

Those are just the designers! The internal art is by Luiz Prado. The cartography is by Elven Tower. Big names doing big things!

Speaking of which, I’m one of the first DMs Guild Adepts for the launch of Tomb of Annihilation! Just what does that mean? Check out this excerpt from Chris Lindsay’s launch announcement:

Over the next few months, we’re going to highlight the creative activities of a select few game designers on the Dungeon Masters Guild through the Guild Adept program. We have chosen 10 extremely talented individuals and, not unlike lion robot vehicles, formed them into a singular formidable entity of creative D&D development. We’ve given them early access to the upcoming adventure from D&D, Tomb of Annihilation, and have challenged them to create kickass adventures and rules options to accompany the launch of that product.

So what exactly does that mean? When Tomb of Annihilation comes out on September 8th, look for some great new content that relates to that adventure from me on the guild… along with these other creators!