How I Built Tiamat’s Faerûn

I was very fortunate to get to attend D&D in a Castle as a guest dungeon master at the beginning of July! If you’ve been following this blog, you know the set-up for my adventure was, “What would the world look like ten years after adventurers failed to stop Tiamat’s arrival in the Faerûn in the Tyranny of Dragons storyline?”

I’ve had a lot of people asking me how I prepared for the three eight-hour days of DMing for the event, so I thought I would share the process.

As I started to prepare for this adventure I set some goals for myself. So I made this list.

I used this list to guide the rest of my adventure building. If I was lost about what to plan next, I referred back to these goals.

Step 2. Bring in the Players

Since I already had a blog post about my world and I was introduced to the six players who would be playing in my group months before the event, I shared the post with them and we began to begin creating characters together online. I learned what kind of characters they wanted to create, that they enjoyed a mix of roleplay, exploration, and combat encounters, and got their backstories, which I’m going to share in a future post with their permission.

Once I knew the world and the characters, I set about making an outline for the overall story. I knew I wanted my player characters running all over Faerûn to experience the different ways the dragons had terraformed the world. I needed to give them motivation to do just that. I came up with this idea:

When Toril was young, Tiamat saw it as a world to conquer. Bahamut wanted to protect Faerûn so he sent six warriors with weapons forged of his own blood to guard the world. These weapons, when brought together, had the power to slay Tiamat. She stayed away. Eventually Faerûn flourished and Tiamat was trapped in Avernus, the first layer of the Nine Hells. Bahamut’s warriors died and were buried in secret tombs with their weapons.

I used this information to start a rough outline. I needed a way for the characters to get the initial information, tombs for the warriors and encounters they would face on their journeys between tombs (some of which I related to their backstory and others were to show how insane the world had become). Then I added a twist.

At some point in their journey to collect these weapons, Tiamat would become wise to the characters’ search for the weapons. At that point she would send her dragons to receive the remaining weapons, and the characters would have to delve into dragon lairs if they wanted the items.

Using all this information, I ended up with a numbered outline that looked like this:

This incredible map from Ryan Hennesy, the designer of this very site and an amazing cartographer, was the next step. Since I didn’t know in what order my players would tackle the tombs and lairs, I asked him to put all five tombs (one tomb had two warriors) and all five lairs of Tiamat’s captains on the map. The map really helped build the world and was a super useful tool during our game! 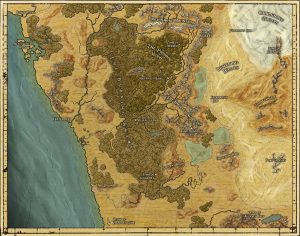 Rather than build five tombs and five dragon lairs and only use half of them, I decided to make modular dungeons that could thematically fit both the dragons and tombs and easily swap elements in an out. I wanted to be able to control the number of rooms in each dungeon so I could scale the location up or down in size based on how much time we had left in the day and how much the players seemed to be enjoying the place. Good thing I had Sly Flourish’s Fantastic Locations by Mike Shea, a book that allows for everything I just said. I had already read the book, but I needed a refresher. I was super busy leading up to the event, but luckily Mike just put out an audio book version narrated by Rudy Basso, so I could review the book while doing other tasks. You can get the book on audible. (Shameless plug: If you use our special DSPN link, you can get it free.)

So I just pulled my favorite dungeons out of the book, made some bullet pointed notes about what encounters I wanted in each room, and the dungeons were set!

Once I had my story outline and my dungeon bullet points, I made a list of one-line encounters that could happen involving Tiamat’s minions, the character backstories, and the devils who were involved. These were quick and easy, but from them sprung memorable moments, such as the time our bard sold his soul for an invisible roc. Yep.

Then I also designed their magic items, using items in the Dungeon Master’s Guide and then making tweaks so the weapons were optimized against dragons.

So did it work? I can tell you I had a blast. I think my players did too. For one thing they worked together to do a 28-page, bullet-pointed recap of the story after it was done. This document makes my DM heart happy. With their permission I may share it with all in a future post.

Oh, and they also wrote this: