Dungeon of the Mad Mage

This has been a busy week, but I have another DMs Guild product to share! From the minds of M.T. Black, Greg Marks, and myself comes Mirt’s Undermountain Survival Guide! If I am being honest, M.T. and Greg did the lion’s share of the work. I wrote one of the races (the nimblewright), but it is an INCREDIBLE product that’s already an Electrum best seller. Here’s the description from DMs Guild:

It takes more than a strong arm and a sharp sword to overcome the dangers of Undermountain. What you need is an expert, someone who has been there before and can advise what resources you will need to survive. Who better to guide you than Mirt, the renowned veteran of Undermountain?

Mirt’s Undermountain Survival Guide provides everything you need to make your expedition a resounding success, including:

Mirt’s Undermountain Survival Guide is brought to you by these Guild Adepts: M.T. Black, Greg Marks, James Introcaso, Will Doyle, and with Chris Lindsay supplying the voice of Mirt!

Want a free PDF preview of Mirt’s Undermountain Survival Guide? Of course you do! Here is MOST (but not all) of the nimblewright race I worked on and just a handful of the new magic items in a PDF:

It’s Thanksgiving here in the US and we’re supposed to tell folks what we’re grateful for while stuffing our faces. I’m grateful for my blog readers and for all the cool news I have to share today.

Demonplague in Print and PDF

The Demonplague, a level 1 – 20 D&D adventure I wrote with Johnn Four that was Kickstarted in the beginning of 2018, is now available in PDF and print! I am so proud of this product. You can get previews of the content here and here on this blog, and you can check out the actual play podcast and stream on the Don’t Split the Podcast Network site.

If you’ve been following this blog, then you already know about Burn Bryte, the original science fantasy RPG I created withJim McClure, Kat Kuhl, and Darcy Ross for the Roll20 virtual tabletop. The playtest just opened up to Roll20 Plus subscribers! If you’re on Roll20, grab a group, play our one-shot adventure, and send us some feedback! If you want to learn more about Burn Bryte, behold our weekly livestream with me as GM!

Dungeon of the Mad Mage

Last but not least, I was lucky enough to contribute to another D&D hardcover adventure, Waterdeep: Dungeon of the Mad Mage. This is now available in stores (virtual and real) everywhere! If you get it, check out the Crystal Labyrinth! That’s where I did most of my work. 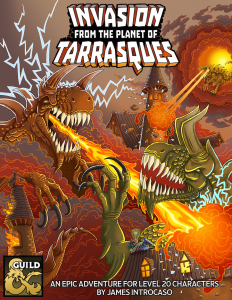 Just a quick update here this week because I am swamped!

If you missed the announcement over the weekend on the Stream of Many Eyes, Wizards of the Coast is releasing two new hardcover D&D adventures this year. I had the fortune to contribute to both Waterdeep: Dragon Heist and Waterdeep: Dungeon of the Mad Mage. Here’s a description of both from the D&D website:

A fantastic treasure trove is yours for the taking in this adventure for the world’s greatest roleplaying game.

Famed explorer Volothamp Geddarm needs you to complete a simple quest. Thus begins a mad romp through the wards of Waterdeep as you uncover a villainous plot involving some of the city’s most influential figures.

A grand urban caper awaits you. Pit your skill and bravado against villains the likes of which you’ve never faced before, and let the dragon hunt begin!

Waterdeep: Dungeon of the Mad Mage

Explore the mega-dungeon of Undermountain in this adventure for the world’s greatest roleplaying game.

In the city of Waterdeep rests a tavern called the Yawning Portal, named after the gaping pit in its common room. At the bottom of this crumbling shaft is a labyrinthine dungeon shunned by all but the most daring adventurers. Known as Undermountain, this dungeon is the domain of the mad wizard Halaster Blackcloak. Long has the Mad Mage dwelt in these forlorn depths, seeding his lair with monsters, traps, and mysteries—to what end is a constant source of speculation and concern.

This adventure picks up where Waterdeep: Dragon Heist leaves off, taking characters of 5th level or higher all the way to 20th level should they explore the entirety of Halaster’s home. Twenty-three levels of Undermountain are detailed herein, along with the subterranean refuge of Skullport. Treasures and secrets abound, but tread with care!

A lot of folks have asked how this gig came to be. Wizard of the Coast reached out in the beginning of 2017 and asked if I had any work on the Dungeon Masters Guild I thought was a good example of my work. How did they know to reach out? Likely because of some of the previous work I had done and my sales numbers on DMs Guild. I sent them two D&D Adventurers’ League adventures I had worked on: A Dish Best Served Cold and Tales of Good & Evil. (Many thanks to Travis Woodall and Shawn Merwin for editing these adventures and everyone who playtested them for making them awesome.)

As they have said before, Wizards of the Coast is using the DMs Guild as a way to look at potential new authors. They plan their releases so far ahead, you’re just hearing about people’s first experiences now, but I’m sure there will be more names from the Guild contributing to official D&D products.

Several weeks went by and then I was offered the chance to contribute to Dragon Heist with James Haeck. Many folks from the D&D team and tons of freelance artists worked on the book as well.

When Dragon Heist wrapped, Wizards of the Coast reached out again, asking me to write a bit for Dungeon of the Mad Mage, which had many awesome freelance contributors already working on the book.

In the coming months, keep your eyes here and your ears on Table Top Babble for me to talk with other collaborators about the process. We can’t say much until the books are released, but I will say that working on official D&D adventures was as awesome and creatively fulfilling as I had hoped. Now I hope you have as much fun playing as we did creating!