Just a quick update this week to let you know that my official D&D adventure, Sleeping Dragon’s Wake, is now available on Roll20 an D&D Beyond. Both marketplaces have a variety of deals available!

Just what is Sleeping Dragon’s Wake? It is the middle of adventure in a trilogy meant to take place after Dragon of Icespire Peak, the new adventure that comes with the D&D Essentials Kit. Shawn Merwin wrote the first adventure, Storm Lord’s Wrath, and Will Doyle wrote the third, Divine Contention. We all helped contribute and develop each other’s adventures too! Hannah Rose edited all the adventures, Will Doyle and Stacey Allan did the beautiful adventure location maps, Bill Benham and Chris Lindsay oversaw the story, and a whole bunch of other people came together to bring the products to life. I cannot thank the Roll20 and D&D Beyond production teams enough for turning our word documents and PSD files into an amazing product.

So what is the adventure all about. Here’s a description:

Abandoned for many years, Leilon was once a fortified settlement midway along the High Road from Waterdeep to Neverwinter. Under the paid service of the Lord Protector Dagult Neverember, citizens of Neverwinter have returned, intent on reestablishing Leilon as a safe waypoint once more. Unfortunately, followers of Talos have also arrived, and they’ve brought the weather with them. To make matters worse, a cadre of villains devoted to both Myrkul, god of death and the Cult of the Dragon, have risen from the Mere of Dead Men to strike out as well.

I am SUPER excited to announce Dragon Heist: Forgotten Tales is on the DM’s Guild. In fact it’s been available for a week and is already a Silver Best Seller! Thanks to all who already purchased. I loved working on this project with design greats Will Doyle, James Haeck, and Rich Lescouflair.

Dragon Heist: Forgotten Tales is a supplement that enhances the replayability of the already modular official D&D adventure Waterdeep: Dragon Heist. This supplement brings new beginning adventures and two new concepts for the Vault of Dragons so that your players are constantly facing new challenges on a second play through.

This supplement is divided into four chapters. You can use every chapter to create an entirely new experience with Waterdeep: Dragon Heist, or simply use the chapters or sections of the supplement that interest you.

If you pair this supplement with Unseen Waterdeep, which adds a fifth villainous option to Waterdeep: Dragon Heist, you can actually create an almost entirely new adventure. With both you get a lot of extra life out of the main adventure.
If you do buy Dragon Heist: Forgotten Tales or Unseen Waterdeep, please leave me a review on the DMs Guild so I know what you think.

I’m currently at Winter Fantasy! If you’re there too, please feel free to say hey. I’d love to meet you.

Xanathar’s Lost Notes to Everything Else

This has been quite a year! In the Summer! I announced that I was fortunate enough to be selected to join the DMs Guild Adepts program, through which I have published several PDFs with amazing creators on the DMs Guild!

Our largest project to date is without a doubt, Xanathar’s Lost Notes to Everything Else. Behold! 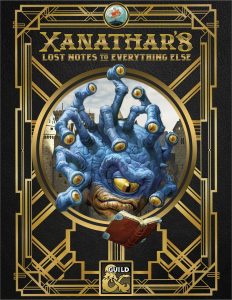 The brainchild of Ruty Rutenberg, this thing is a massive 88 pages described as…

Xanathar’s Lost Notes to Everything Else is a massive collaboration of DMs Guild Adepts that expands the options for players and dungeon masters presented in the D&D core rulebooks and supplements.

This sourcebook provides a plethora of scribbles, scrolls, and schemes curated by Volothamp Geddarm’s protégé, Aladair, pilfered from Xanathar prior to publication of his Guide to Everything. Presented in the crime syndicate’s unique style, including a high fashion collector’s cover, the DMs Guild Adepts bring you new player options, including subclasses for every class, backgrounds, magic items, a race, DM rules options, and an adventure!

Inside this massive tome of full color art, you get:

An Adventure in Chult for Tier 1 Characters

If you want to see one of the subclasses I worked on with Ruty and INCREDIBLE editor James Haeck, check out the Fey Sorcerer! 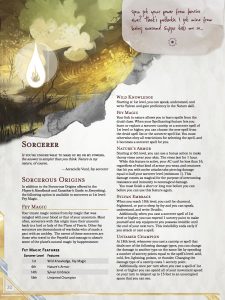 Note the amazing layout and production by Rich Lescouflair! He worked tirelessly on this product and is now getting it ready to create a Print on Demand version! Helluva guy!

In addition to Rich, Ruty, James, and me, here’s who else worked on this project!

You can get your PDF copy ofXanathar’s Lost Notes to Everything Else right now on the DMs Guild!

Scare Your Players with HUNTER!

Halloween is coming up and that’s an excellent time to scare you players with a terrifying game! Be it a Curse of Strahd one shot or a battle with a rotted angel, we’re all getting ready to scare our players.

Well I’m happy to share with you my latest DMs Guild Adepts collaboration with the incredible Will Doyle, who is one of the designers who worked on the hardcover adventure for Tomb of Annihilation among many other credits.

Hunter is tough adventure for 3rd level characters that can be dropped into any Tomb of Annihilation or jungle campaign or played as a Halloween one shot! It’s heavily inspired by the movie Predator if you couldn’t tell from the cover, made my the amazing Stacey Allan. 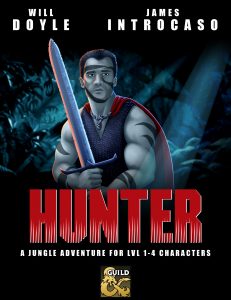 Just what makes Hunter so scary? Let me give you a list that you should apply to any horror-themed adventure. Use this as a checklist if you plan to run a scary adventure centered around a monster.

Happy Halloween and enjoy being hunted!

Do you like zombies? Do you like dinosaurs? How about dinosaur zombies? Well, I’ve got them for you in spades!

Check out this excerpt from Chris Lindsay’s launch announcement:

Over the next few months, we’re going to highlight the creative activities of a select few game designers on the Dungeon Masters Guild through the Guild Adept program. We have chosen 10 extremely talented individuals and, not unlike lion robot vehicles, formed them into a singular formidable entity of creative D&D development. We’ve given them early access to the upcoming adventure from D&D, Tomb of Annihilation, and have challenged them to create kickass adventures and rules options to accompany the launch of that product.

I’m one of those ten people! We’ve put out and will continue to create through October new products on the DMs Guild for Tomb of Annihilation. Here’s what I’ve helped create so far.

In addition to the encounters, the supplement includes 3 new dinosaurs (also found in Beasts of the Jungle Rot), a Port Nyanzaru Chase Complications table, supplemental rules for suspicion, and a map of a Port Nyanzaru bathhouse. I wrote three encounters for the book and edited the thing! Here’s who else contributed:

It should be noted that in addition to the amazing encounter he wrote, Rich Lescouflair also did the layout and cartography for this product. He rocks!

Beasts of the Jungle Rot

Beast of the Jungle Rot is a collaboration between Ruty Rutenberg and myself. No Tomb of Annihilation campaign is complete without this collection of more thunder lizards… and more zombie thunder lizards! Behold new dinosaurs, including the legendary giganotosaurus and titanosaurus, and new zombie dinosaurs with terrifying and unique necrotic abilities! Plus expanded rules for random encounters, dinosaur races, and hunting dinosaurs for hides and eggs. A full list of dinosaurs can be found on the product page.

If you like these dinos, you should check out Will Doyle’s Ruins of Mezro. It has a few of them featured, plus a lot of other awesome!

In Cellar of Death something evil is devouring the souls of the living in Chult, but before the characters take on the horrors in Tomb of Annihilation, they must first uncover the death curse’s origin by braving a lich’s tower in the Cloakwood. This introductory adventure is designed for a party of four to six 1st-level characters, who should advance to 2nd level by the adventurer’s conclusion. It is a prelude to Tomb of Annihilation that should take about 2 to 3 hours.

What inspired Cellar of Death? The introduction of Tomb of Annihilation states Syndra Silvane learned about the Soulmonger from the Harpers, who “received their intelligence from a lich.” This adventure is the story of how the Harpers gathered that information.

Cellar of Death has a second purpose: to give characters a greater stake in the outcome of Tomb of Annihilation by creating an NPC they love. The death curse kills this NPC, giving the characters a personal reason to go to Chult.